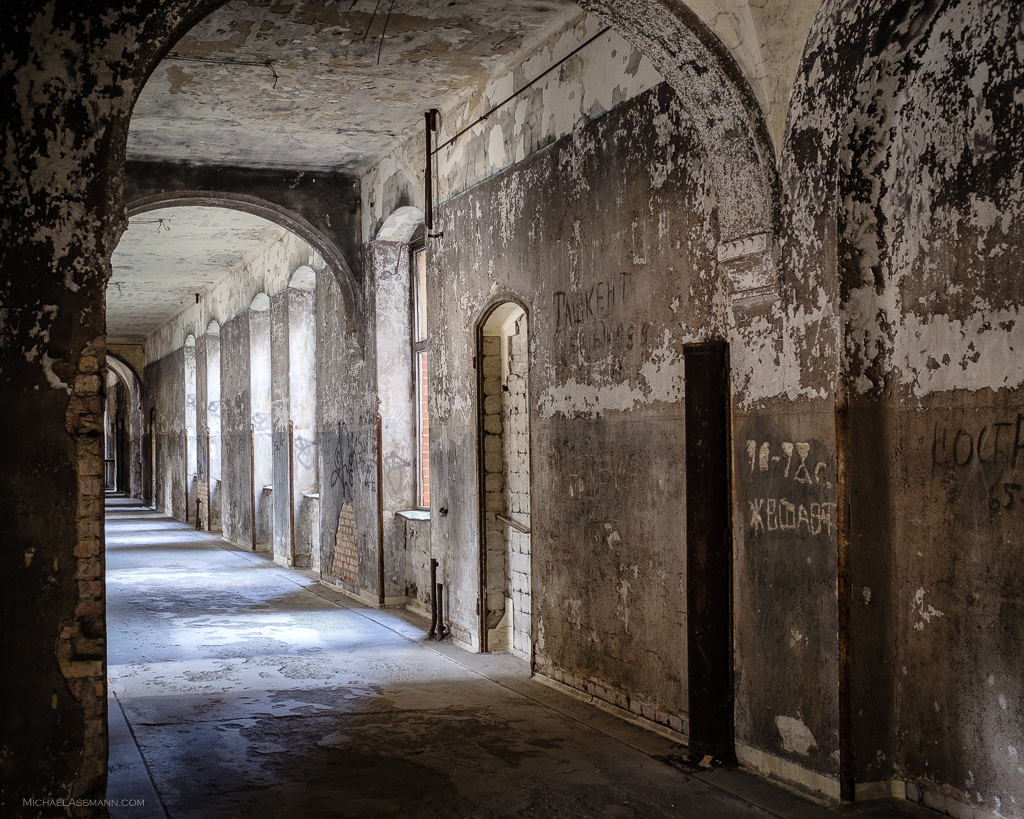 Urbex photography – the genre of taking pictures of abandoned places – seems to attract a fair number of followers. At the time of this post Instagram shows more than 6m entries for the hashtag and flickr reports close to 1m photos related to this term. I am not particularly interested in this genre, still I can’t deny the beauty of old buildings that is shown in some of these images. Two weeks ago I unexpectedly came across an opportunity to see such a place myself.

Our plan was to visit the tree top path in Beelitz-Heilstätten with my family and my mother. Without checking the internet we expected to be in the woods, on a walking path similar to the New York Highline. Well, it wasn’t quite so.

With the introduction of the social insurance system in Germany at the end of the nineteenth century hospital complexes were built across the country. Beelitz-Heilstätten was such a place, setup as a sanatorium for Berlin workers to treat tuberculosis and other lung diseases. During World War I and II it served as a military hospital, after 1945 it was the largest military hospital of the Red Army abroad.

Heavily destroyed during the war only some of the buildings have been reconstructed since then. Others were left in their state and one of them (the Alpenhaus) was opened for us during a guided tour. Inside we could see the original layout of the rooms and remains of the equipment used – beside lots of rubble. Walls were covered both with the original decorations as well as graffiti art added later. All in all, an interesting setup to try urbex photography.

Striking for me was how nature has fought its way back into the building. We saw trees and bushes growing in the rooms. The entire roof of the building was covered by trees which had been growing there for decades.

This place certainly lacks the secrecy loved by urbex insiders. However, for the beginner or the occasional amateur this place offers opportunities for many interesting images. The other people on the tour took photos and so did I.

My main camera that day was supposed to be an X-T3 with a tele zoom as I had hoped to get a glimpse of the Berlin skyline on the horizon when walking the tree top path. Fortunately I had also brought my X100F and ended up using it inside the building. Again it has proven its versatility, and the quality of the out-of-camera JPEGs is amazing. However, this time I preferred how Lightroom has processed the raw files and has added some grit.

Most of the photographs made that day ended as a 4×5 crop. For some reasons I start loving this aspect ratio. I wish Fujifilm would introduce it into the X-series with future firmware updates.