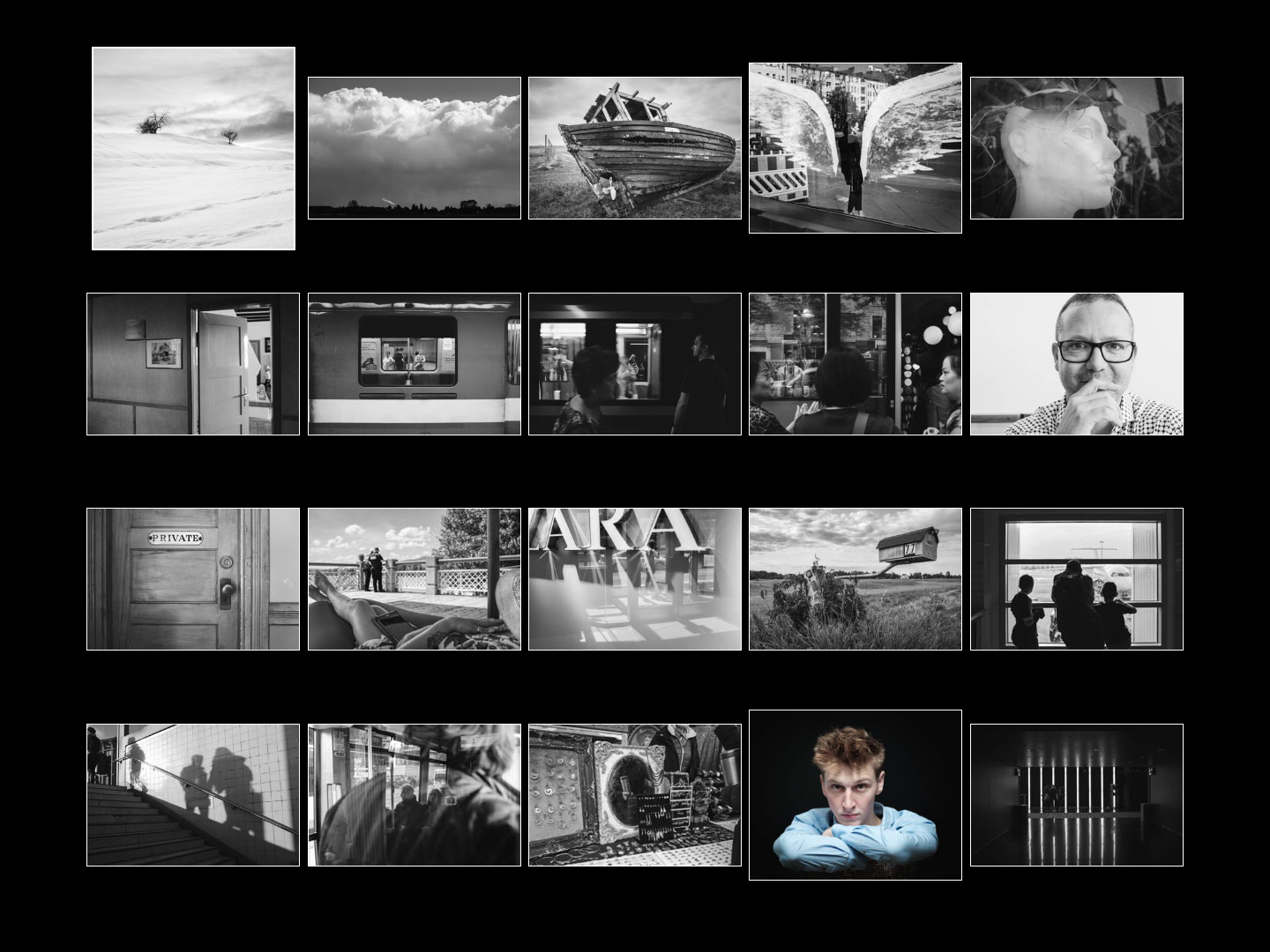 Like many of us I spend more time at home these days due to the corona virus. Well, on a positive side, this has allowed me to finalize the post on my top ten 2019 photographs. I had started to write it already in January, but other business has prevented me from putting it online.

Like in the past years I have used the days after X-mas to review my favorite images made during 2019 and to select my personal top ten for the year. The process I used has been similar to the one in previous years; however, with the small modification that this time I invited 2 other people to help me with the final selection.

Looking at the final result I was surprised to see that all of the top ten images this year were shot in black & white. In fact, there was only one color image that made it beyond the 2nd pass of the selection process (a portrait), however, I eliminated in the final round. This doesn’t mean I didn’t photograph in color in 2019. In contrary, I experimented with color a lot to catch the mood of moments. However, judging by the results I don’t see the majority of the images as being equally strong as the black & white ones.

2019 was also a year in which I focused more on producing series of images. My plan was to go beyond the single image to tell stories about places. In this process I learned how I could make images work together for a strong story, but also that it’s not always easy to identify the one image that best represents the whole story with all it’s aspects. Many times there wasn’t any, and consequently none of these images made it to the top ten. Nevertheless, I am very happy with these images, too, and you find some of them in past blogpost: Through glass – Looking out, Urbex Photography or Changes.

Trees in the snow

It is a tradition now in our family to go skiing in the Alps during the school break in February. While the mountains always provide an opportunity for impressive images I have also been looking for more minimalistic views. On our walks we had passed by this place with the lonely trees on a hill already several times. I had actually never seen people walking up to them, but human traces in the snow are clear proof of some activity there and added to the mystery of the place.

When taking the image I was careful to protect the highlights in order to keep the details in the sky. While the raw file would have given me more leverage I was satisfied with the quality of the SOOC JPEG. It allowed for the required adjustment of 2 stops to bring up the shadows. In addition, it also presented me in Lightroom with the square crop that I had set in camera as my default for all the images taken that afternoon.

As a city Berlin can be a pretty busy place with its traffic, people and a general “busy-ness”. Still within city limits though, there are places way more rural that let you forget that the next bus stop to the center is only a few minutes away. One day in March I headed to such a place just north of where we live, and there I took in search for images a path I hadn’t explored yet before.

Being initially more interested in the trees and their colors around that time of the year, soon the sky caught my interest. Clouds had built up and looking south I could see that it had started to rain over the city while I was walking in the brightest sunlight. This contrast between the depressing grey and the bright light that would eventually come back, to warm up and dry the wet places, was what should become my photo of the day.

From hindsight I also like the metaphor of the image: There’ll always be times in our lives when things aren’t as great as we would like them to be. We should not succumb to this feeling and rather look forward; there is always a good chance for better days in front of us.

On a technical note, this is the only image not taken with the X100F among the top ten. I had also brought my X-T3 with the XF55-200 that day, and it was the medium tele perspective that allowed me to frame the photograph the way I wanted it.

The image came out of camera pretty flat despite the use of ACROS Red as the film simulation. Therefore I developed the image from the raw file, especially to bring out the nuances in the lower sections of the clouds.

New life in an old house

This image was made during a family vacation at the Baltic Sea. We always rent the same house there which is spacious enough to host 3 families. There are drawings, paintings and photographs all over the place telling about its age and who has lived there.

I was testing the wide angle conversion lens for my X-100F when I heard my nephew running through the house. There was certainly an element of luck in this shot, and I love how the contrast of young and old plays out in this image.

Shot with the ACROS Red film simulation at ISO 6400 I am very pleased with how the camera provides a film-like look in the out-of-camera JPEG that adds to the feel of the photograph.

Metro systems and subway stations are interesting places as with the rhythm of the trains coming into and leaving stations the scenery is constantly changing. Eyes meet briefly in the stream of strangers passing by and cause a deeper human contact than just the physical one. Train windows serve as separators and connectors, framing scenes and reflecting light.

I had spent the morning on trains and in stations already when I discovered this scene below. In it a few elements come together that I could not have constructed better, and so all that was left for me was to be quick enough to capture it.

The final image here is almost the SOOC JPEG. The only adjustments in Lightroom were an increase of the contrast and some straightening.

In a workshop with Patrick LaRoque we discussed the use of layers and intervening objects in an image. He encouraged me to be more intuitive when taking photographs.

Looking at my photographs from last year I think I start getting this concept. The image below is another one from the Montreal Metro series and probably represents best how far I have come.

Exposure was set to f /5,6 and 1/125s to achieve the depth of field and the level of motion blur that I had in mind. Under the given light conditions I ended up with ISO 6400 to keep as many details in the shadows as possible. After initially working with the SOOC JPEG, I developed the final image from the raw file as it gave me the better results in local contrast enhancements.

Sometimes it is only in the review process that a scene reveals its full potential for an interesting photograph and the image below is a perfect example. Initially I had been attracted by the 3 ladies discussing in front of the restaurant, the decoration provided some interesting details and so I took the shot. What a surprise when I discovered in post processing that my photographic action has not been left unnoticed.

It was the work with Patrick, who helped me to find this jewel. The photograph really came to life in post-processing. The key adjustments included some cropping and local contrast enhancements to guide the viewer in reading the image.

While I love portrait photography, it is not easy for me to ask people to allow me to make a picture of them. The image below is dear to me as it was created during a lunch meeting with a former colleague where I overcame my fears and simply asked him. A few photographs were taken while we were continuing our conversation, and I ended up with images that represent very well how I saw him when we were working together. Thanks Nicolas!

A new feature of the X100F vs its predecessors is the availability of a digital tele converter, and for this image I used the 50mm one. When using this feature you have to work with the JPEG as no raw image is written to the card. I set the camera to ACROS Green as my film simulation of choice and ISO 640, f /5,6 and 1/125s to protect the details in the highlights. As a final adjustment the exposure of the shadows was lifted in Lightroom.

Overall I am very pleased with the result and the print looks great. While sharpness would certainly be higher with a dedicated portrait lens, it is more than just ok here and the X100F proves to be a good companion for this type of photography as well!

We were at Baie de Magog and the sun was shining quite intensely on our planet. We found cover on this roofed deck and while almost everybody went for a swim I explored the place with my camera. Later, two policemen came up on the deck checking the beach. They were not only noticed by me, but I found this angle to document this moment.

The original scene presented a high level of contrast, and this image is another example of what is possible to achieve with Fuji’s JPEGs. I used Lightroom to darken the sky and bring out the details in the clouds, to lift the shadows and to increase overall midtone contrast using the clarity slider.

On the return from vacation we were waiting for our connection flight back home. It was during the summer holidays, so we were not the only ones travelling with kids. My boys are older now, but when I saw this scene it was like a trip into the past: I still remember how they were attracted by the action on an airport with planes arriving or preparing for departure.

You probably realize by now that I like to create most of my images using the in-camera JPEG processing. It’s not different with this image: with the film simulation set to ACROS Yellow and exposed for highlight protection the main thing left to do in post processing was to lift the shadows.

I was exiting the subway in Berlin when the sun was already low and shining from the right angle to project beautiful shadows on the wall. As strangers on the stairs were passing by each other, their shadows created another layer there with its own stories.

This image is the SOOC JPEG using ACROS Yellow and exposed with 1/800s, f /5,6 and ISO 200. I love not having to spend time in post-processing!

Stay healthy and all the best for the remainder of the year!